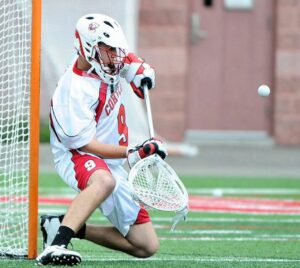 27 MAY 2012: Louis Riley (7) of Dowling College knocks Jake Ternosky (22) of Limestone College to the ground in a battle for the ball during the Division II Men?s Lacrosse Championship held at Gillette Stadium in Boston, MA. Dowling defeated Limestone 11-10 for the national title.